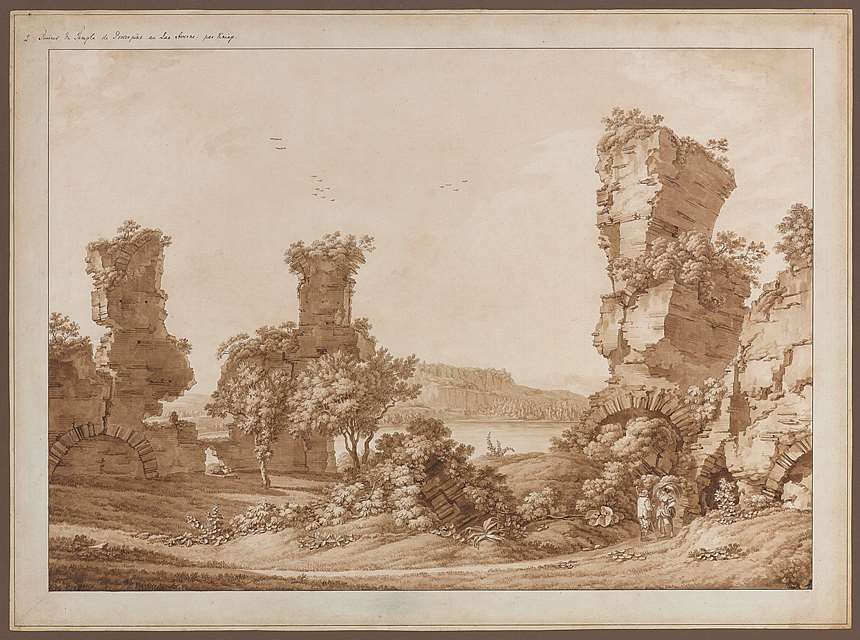 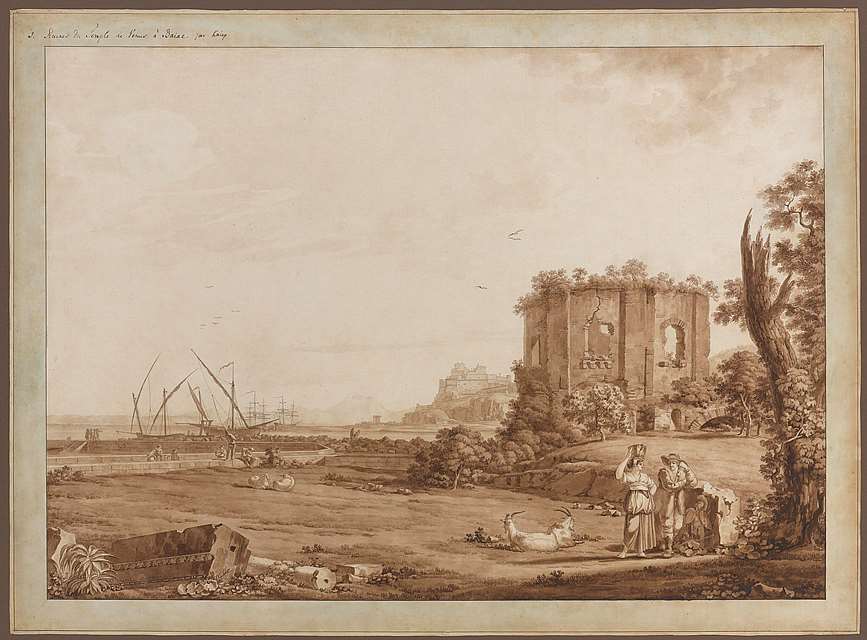 Christoph Heinrich Kniep began his career in 1778 drawing portraits in Hamburg. In 1780 he moved to Berlin, where he made the acquaintance of the art-loving prince bishop and writer Ignacy Krasicki (1735–1801), who enabled him to travel to Rome in 1781. It was at this point at the latest that Kniep changed from portraits to landscapes. In 1783 he made friends with Johann Heinrich Wilhelm Tischbein (1751–1829), through whom he met such artists as Johann Georg Schütz (1755–1813) and Friedrich Bury (1763–1823). His circle of acquaintances also included Jakob Philipp Hackert (1737–1807), who was at the time the best-known landscape painter working in Rome. As Krasicki withdrew his financial support a short time after his protégé had arrived in the Eternal City, Kniep soon found that he had to earn a living for himself. However, he was clearly less successful in rising to this challenge than his colleagues Hackert and Tischbein, because he restricted himself to drawing and had a slow manner of working.
In October 1785 Kniep left Rome and settled in Naples, where he remained until the end of his life. The 1780s saw a number of artists from the German-speaking world working in this cultural centre of southern Italy, where they enjoyed the patronage of Ferdinand IV and his Habsburg wife Archduchess Maria Carolina.

At the beginning of 1787 Kniep was introduced by Tischbein to Johann Wolfgang von Goethe (1749–1832). Shortly afterwards Kniep and Goethe made a six-week journey to Sicily, which came to an end on 15 May. This meeting was of critical importance for Kniep’s career, as Goethe purchased from him all the drawings he made on this journey and also issued commissions to the artist after his return to Weimar. Drawings by Kniep were also purchased by Duchess Anna Amalia of Saxe-Weimar, who in 1788 was inspired by Goethe’s Italian travels to travel Rome and Naples herself.
Among Kniep’s other clients were members of the Neapolitan nobility such as Leonardo Tocco di Montemiletto, who purchased an important album of drawings. Kniep also became the dedicatee of the school of drawing entitled Elementi di Paesaggio by Francesco Maria Berio, Marchese di Salza (1765–1820).

Kniep lived and worked for over thirty years on the Riviera di Chiaia in Naples. When the Academy of Art was reordered in 1822, he was made a professor, but without a salary. In his latter years he lived as a recluse in straitened financial circumstances.
Christoph Heinrich Kniep died in July 1825 following a serious illness. His grave is in the Protestant Cemetery at San Carlo all’Arena in Naples.
There are no known oil paintings by Christoph Heinrich Kniep. Stylistically speaking his landscape drawings are most closely related to those of Jakob Philipp Hackert, though Kniep’s are worked through with greater precision and elaborated with figures that testify to his study of antique vase painting. While Kniep produced a large number of vedute while in Naples, he also frequently drew idealised landscapes with ancient monuments and figures in the antique manner.
The dating 1787 on one of the present drawings indicates that the two works date from the very year of Kniep’s acquaintance with Goethe. The first drawing shows the Temple of Venus in Baja, which originally had most likely been part of a complex of baths, and behind it the fifteenth-century Castello Aragonese. The ships lying at anchor mark the harbour of Baja. In the distance one can just make out the Monte Epomeo on the island of Ischia. The second drawing shows the ruins of the temple of Proserpine (also known as the temple of Apollo and likewise formerly part of a complex of baths) on the Lago d’Averno, the waters of which fill an extinct volcano in the Campi Phlegraei. Visible in the background are the hills of Cuma. Both the drawings are of popular locations that were commonly visited by cultural travellers and frequently depicted by landscape artists. Kniep’s views are remarkable for the great precision of the details; even particular features of the background motifs such as the castle of Baja or the wooded hills of Cuma can be made out perfectly clearly. While the figures in the view of the Lago d’Averno are inconspicuously integrated into the landscape, in the drawing of Baja the shepherd and the woman standing next to him are prominently positioned and executed in a manner that reveals the depth of Kniep’s study of figure-drawing. His mastery in this field is particularly evident in the standing woman with her elegant contrapposto.

The appeal of Christoph Heinrich Kniep’s drawings lies in their meticulous execution, wealth of detail and masterly rendering both of vegetation and of figures. When he drew the present two drawings in 1787 he was at the height of his powers as a veduta artist. As a result of his fortunate and inspirational encounter with Goethe he had prospects of new commissions and was generally in a very creative and positive frame of mind. Although his slow manner of working, which was on occasion the cause of indignation and impatience on the part both of patrons and of fellow artists, prevented him from making such a good career as he might have done, his very tempo resulted—as is shown by the present two vedute—in drawings of exceptional pictorial quality and great beauty.

An expert’s report by Dr. Claudia Nordhoff is available.

The drawings come from the Carlo Knight Collection, Naples, prior to which they are recorded as having been in the hands of an English dealer (1986)