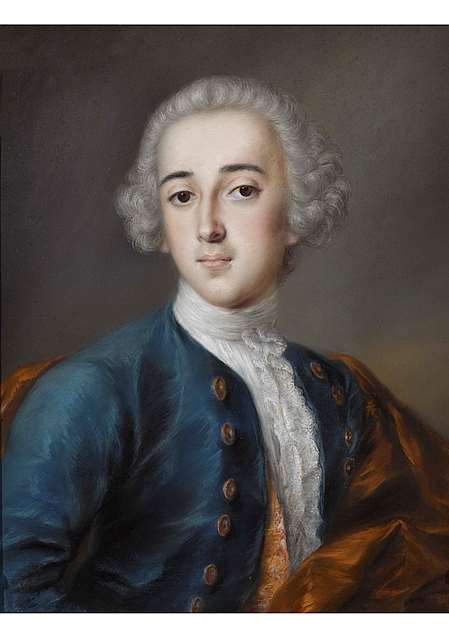 Rosalba Carriera was the main exponent of European pastel painting in the era of Louis XV. With this technique in this pastel on blue paper she portrays a young man pictured almost to the waist, with his face slightly turned to the right and his chest to the left. The face is depicted in full light, emphasizing the bright luminosity and creating concordance with the luminous grey background. The picture can be considered a study of the effects of intense light on skin, hair and clothing. The pallor of the face harmonizes with the white of the light lace shirt. The nose is drawn with touches of brown pastel and beneath it very light grey shading can be seen, a slight hint at downy hairs. The curly hair is depicted with rounded pastel marks. The blue jacket with two different tones highlights a study of the effects of light on fabric, which appears dark under the armpit, becomes lighter at the folds and emphasizes the buttons. Even the brown cloak is made up of broad and obvious touches that bring out the intensity of the light. Effects of this kind are found in the painter's later works and in particular in the depiction of Water, datable to 1746, which is part of the Elements series (Gemaldegalerie, Dresden). The figure depicted has a strong resemblance to the figure in the Portrait of George Townshend (28 February 1724 – 14 September 1807), known as The Viscount Townshend son of Charles Townshend, 3rd Viscount Townshend, and Audrey Ethelreda Harrison, today in the Necchi collection in Milan (Bernardina Sani, Rosalba Carriera 1673-1757. Maestra del pastello nell’ Europa ancien régime, Torino 2007 cat. 411, p. 357). Doubt was placed on the traditional identification with George by Catherine Whistler, who thought that it could also be his brother Charles (29 August 1725 – 4 September 1767) (Catherine Whistler, Ritratto dell’onorevole George Townshend primo marchese Townshend, in Rosalba Carriera «prima pittrice de l’Europa», exhibition catalogue edited by Giuseppe Pavanello, Venice 2007, pp.150-151). Unfortunately we have no information on the grand tour of the two brothers and therefore we have no possibility of identifying which of the two or if both had their portraits done by Rosalba Carriera. The Monaco pastel shows a different execution technique to the Milan one. The Milan pastel is comprised of small pastel marks that highlight a relationship of full light and contrast with the background in shadow. The Monaco pastel emphasizes the complete harmony between the foreground bathed with light and the luminous background. It therefore involves a study of bright light which differs to the Milan one based on a study of contrasting light. Rosalba was very careful in her study of light and this may mean that it is the same person captured in two different poses and two different lighting conditions.