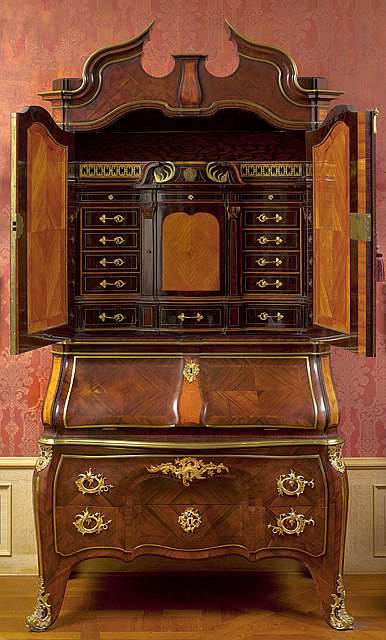 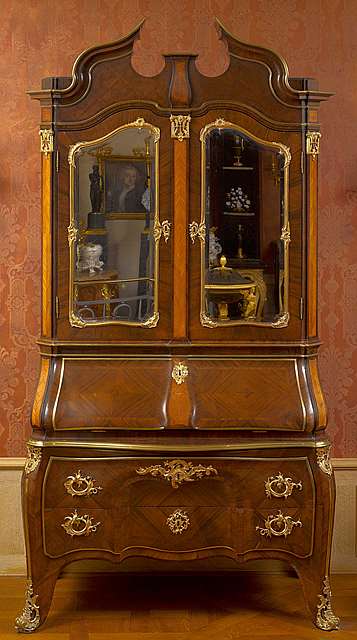 This magnificent bureau-cabinet with its scalloped and bombé form tapers slightly towards the top and is veneered with great variety in several different hardwoods. One of a small group of pieces of furniture that exemplify Dresden cabinetmaking of the Rococo at its very finest, it is made up of three parts: a two-drawered commode with knee recess; a bureau with fall front and complex interior; and a cabinet section on top with two mirrored doors opening up to reveal a variety of drawers and compartments. The bureau-cabinet was developed in England at the end of the seventeenth century and from 1733/1734 was a prescribed item for candidates for the master title in the Dresden guild of cabinetmakers. Even at that time, many such writing cabinets were fitted with costly mirrors from Saxony’s own works at Dresden or Friedrichsthal. They very soon became standard elements in the furnishings of Saxon country seats and town palaces, where they served variously as writing desks, collection cabinets, drinks cabinets (“Schenk Tische”) for bottles and glasses or “Putzschränke” for ladies’ toilet items, or simply stood on their own as conspicuously valuable showpieces.

The introduction of the Rococo style in Dresden around 1740 resulted in the severe rectilinear form being given an additional dynamic through scallop-like curves and bombé sections; likewise, canting on the front corner edges resulted in unified lines proceeding from the feet right through to the domed (later broken) pediment. This elegant form had to be matched by a surface finish of comparable quality and sophistication: in the case of the most expensive work, the veneers were mostly in palisander or kingwood with marquetry made up of mirror-image fields in complicated patterns and framed by delicate borders, with as great advantage as possible being taken of the natural figure of the grain and of the various colours of a range of different woods.

After 1750 the marquetry was executed with a view to overall homogeneity of design and, as in the present instance, largely without regard for the actual construction of the commode and the arrangements of the drawers. The only element that was brought out by the marquetry pattern was the knee recess.

The marquetry was enhanced with delicate and imaginatively designed mounts, often in finely worked gilt brass ornamented with perforated and tooled rocailles, small flowers and foliate or wing-like curves. This, however, was done sparingly and generally only at points such as the handles, locks, mirror frames, a
nd feet, where it was functionally necessary. The mounts on the present bureau-cabinet also include pilaster capitals, latticework, and finely engraved palm-leaf inlays to either side of the monogram cartouche in the inside of the cabinet.

The present bureau-cabinet is notable for the brass facing on the front edges and profiles and the inlays of tin thread as a framing ornament on the fronts of the internal drawers. These elements, which serve to articulate the structure, are a particular feature of the most outstanding pieces of Dresden furniture at this time. The city cabinetmaker Johann Gottfried Leuchte (d. 1759), for instance, used brass mounts to bring out the structure on the writing cabinet that he completed in 1746 and presented for his master title (Kunstgewerbemuseum Dresden). And in 1751 the “Cabinett-Tischler” Michael Kimmel (1715–1794) is recorded as having received special praise at court for this kind of ornamentation.

Michael Kimmel, from Zittau, Saxony, travelled as far as Vienna as a journeyman and rose to become one of the Dresden court’s best cabinetmakers. The only concrete evidence we have of his works are short descriptions in old Dresden inventories and court records, on the basis of which he is credited with a number of very valuable and exceptionally finely worked pieces of Dresden Rococo furniture such as the celebrated bureau-cabinet in the Victoria & Albert Museum, which until 1760 stood at Schloss Hubertusburg, a hunting castle of the Saxon elector and Polish king Friedrich August II.
This, the most magnificent piece of Dresden Rococo furniture known to us today. shares certain elements with the present example: its general form, the ornamentation on the mounts, and in particularly the high-rising broken pediment. In its overall design, however, and in its broken pediment, the present bureau-cabinet also displays close parallels with one veneered in walnut that originally stood in Schloss Börln near Leipzig (Kunstgewerbemuseum Dresden). The most distinctive feature of these and the few other items making up the distinguished group of Dresden furniture dating from the years around 1750/1760 is a particularly high level of surface finish and ornamentation both outside and in the interior.

The carcases are in oak, walnut and spruce handled in the best possible manner. The backs and floors of the dark red-stained drawers in the commode have additional framing elements to ensure flush joins. Likewise, the insides of the doors and the interior have the finest of veneers and conceal a great number of secret compartments behind extractable letter drawers and sliding panels.

In their day, such pieces of Dresden furniture with “an appearance both dainty and splendid” (mit “zierliche[m] als auch prächtige[m] Aussehen”) – including not only Michael Kimmel’s precious Meisterstück, described as having been “precious and most strikingly invented” (“ganz ápart inventirte”), but also the present example – fetched handsome prices, being highly regarded as extremely modern and remarkable for designs that were both aesthetically pleasing and also perfectly functional. These factors are very likely what may have motivated Princess Maria Antonia of the electorate of Saxony to purchase the “Cabinett-Tischler” Kimmel’s Meisterstück for her jewellery cabinet in the Taschenbergpalais in Dresden, in the 1768 inventory of which it was described as a “good cabinet in rare woods and with two mirrored glass doors, decorated all around with gilded brass and fitted inside with many visible and hidden compartments,” (“guter Schranck von raren Holz und 2 Spiegel Glaß Thüren, und um und um mit vergoldten Messing verzieret hat innewendig viele sichtbare und verborgene Fächer”).