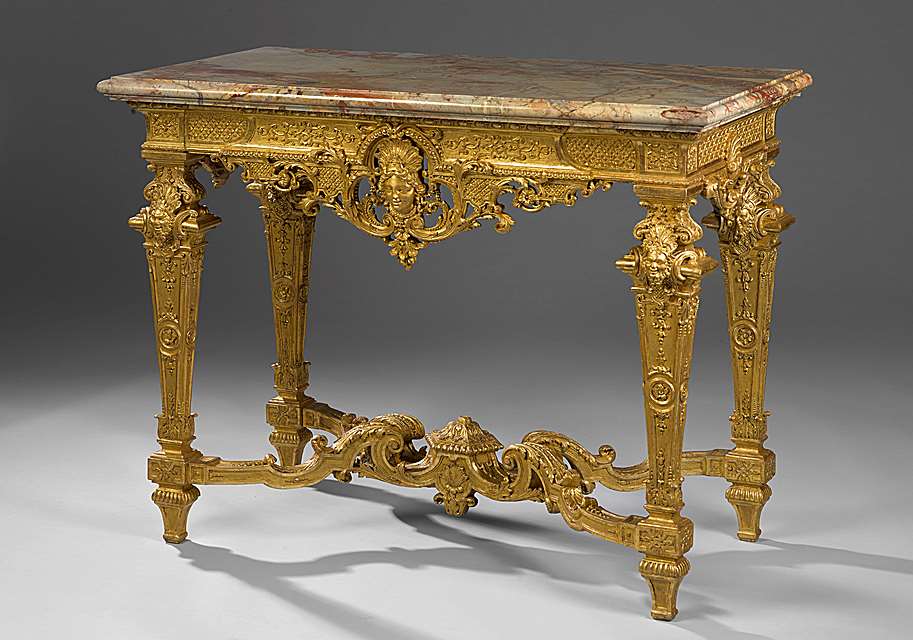 This exceptional console table is characterised by its classical, architectural basic form with straight baluster legs and straight aprons on a rectangular plan. It has richly carved decoration and displays strict axial symmetry.
The straight baluster legs with flat ornament are made up of of a knob-like little foot with cubes decorated with rosettes forming the joints to the stretchers, a tapering, rectangular section shaft with outline beading and foliage pendants, as well as a baluster part consisting of a trapezoid decorated with mascarons and a terminating element of acanthus scrolls. The X-shaped stretchers made of curving, square section timbers with beading along the edges connect the four baluster legs and meet at the centre in a finial. The surface of the flat apron that extends downwards at the centre has diamond patterned decoration and is ornamentally carved in low relief, while the curving element of the apron is freely carved in a highly sculptural manner. At the centre of the table front a female mask wearing a feather headdress is placed in round-headed cartouche. This mascaron is carried by two freely carved scrolls. This sculptural work is of the very highest quality and refinement and shows great elegance of expression. The sides of the table have a shell as the central motif, carried by a small apron contoured by scrolls.

This wall table with an architectural design and richly carved front, geometrical frieze in the apron and poliment gilding goes back to the type of consol table which Pierre Le Pautre (1659–1744), the dessinateur of King Ludwig XIV published in his Livre de tables qui sont dans les apartements du Roy sur lesquelles sont poses les bijoux des Cabinet des Médailles shortly after 1689. Le Pautre designed this series of wood carved and gilded consoles to display the royal silver collection. These new consoles replaced silver furniture which the king had brought to the mint to be melted down. The present console table which is smaller in size connects Le Pautre’s design with decorative motifs of carving in the Régence style. These include the flatly carved strap-work of the aprons, acanthus, palmettes, foliage pendants as floral elements as well as egg and dart and gadroon ornament as articulating elements. The main surfaces are decorated with hatching, fluting, diamond pattern with point fillings in the gold ground. The finely proportioned Régence decoration allows us to date the console table around 1700–1720.

Comparable pieces:
An example closely related to the Le Pautre tables is in the Musée des Arts Décoratifs, Paris, (see S. de Ricci, Louis XIV und Regence, Stuttgart 1929, p. 74). In addition a piece in the Metropolitan Museum, New York is close to the present table, as is an example once in the Lowengard Collection (both tables are illustrated in Ricci 1929, p. 78). A further example was sold at Christie’s London: auction “A View from the Spanish Steps – The Collection of Maria Angiolillo”, 15.07.2010, lot 665.