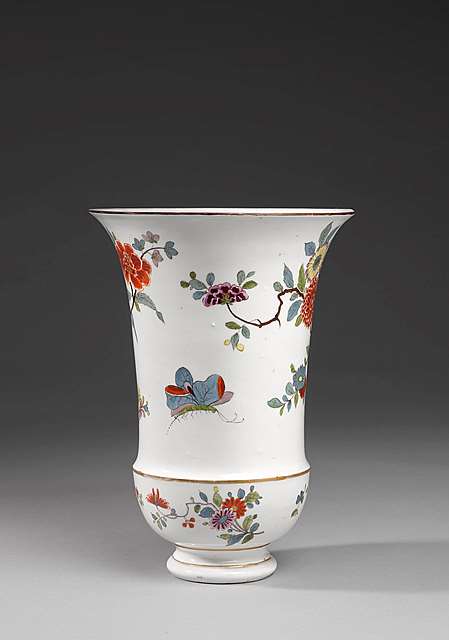 An Augustus Rex beaker vase decorated with chrysanthmums and peonies

The beaker vase with a slightly flared rim, hemispherical lower part and a distinct, profiled foot is painted with fine gold lines that define the different parts and contour the upper rim. The vase is decorated with large chrysanthemums and peonies in different colours as well as a butterfly and originally formed part of a set that probably consisted of five pieces. Often displayed together above fireplaces, these sets or garnitures were generally made up of two beaker-shaped vases and three covered vases, arranged in alternating fashion. The vases that stood on the mantelpieces in palaces of the aristocracy were often stepped in height, with the tallest piece at the centre and the shortest at the extreme left and right. The model was provided by Japanese and Chinese porcelain produced especially for export to Europe, of which Augustus the Strong, King of Poland and Elector of Saxony (1670-1733), had numerous examples in the collection in his Japanese Palace in Dresden. As initially he preferred East Asian porcelain the King not only had numerous pieces from his porcelain palace copied in the Royal Porcelain Manufactory in Meissen, but also ordered considerable quantities of porcelain with what was known as chinoiserie décor.

The porcelain painter Johann Gregorius Höroldt (1696-1775), who worked in Meissen from May 1720, was, with his workshop, responsible for décors of this kind. Together with the painters who worked under him Höroldt produced a wealth of such apparently exotic décors. In the case of this beaker vase he made use of flower motifs from Chinese famille verte porcelain of the Kangxi era (1662-1722) but without directly copying them. Instead he varied the motifs and combined them to create a pattern which, although East Asian in appearance, is in fact an independent Meissen creation.

The Augustus-Rex mark on the underside confirms that this vase was intended for the personal use of Augustus the Strong, either for furnishing the king’s porcelain palace or to be given as a royal gift. The latter possibility seems more likely, as pieces intended for the royal collection usually have an incised inventory number, rubbed with lampblack, on the underside, beside the manufactory mark.