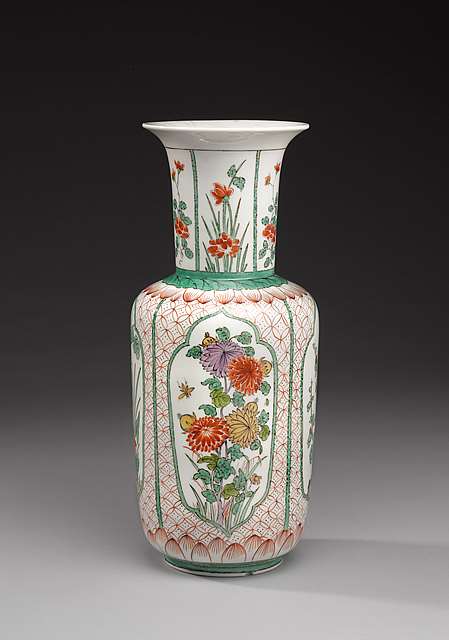 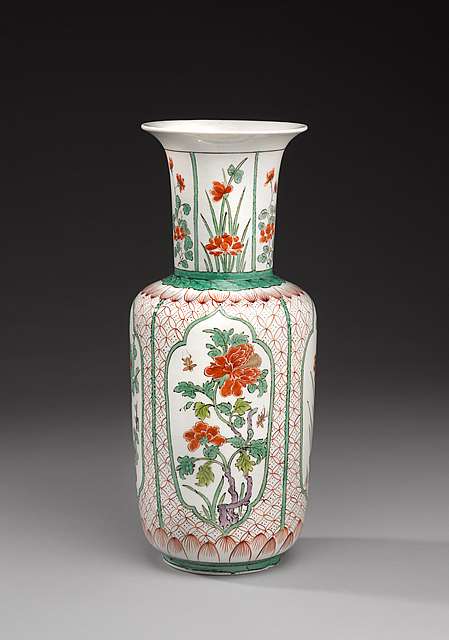 An Augustus Rex vase with emblems of the seasons

This baluster vase with a round foot ring and long cylindrical neck leading to an everted rim can be assumed to have been a copy, both in form and decoration, of a Chinese famille verte vase from the collection of Augustus the Strong (Dresden 1670–1733 Warsaw). While the original Chinese vase is no longer amongst the holdings of the porcelain collection of the Dresden State Art Collections, it was clearly used as the model for a whole set of vases produced at the orders of Augustus the Strong (as is shown by the Augustus Rex mark in underglaze blue on the undersides), probably to form part of the furnishings of the Japanese Palace.
The painted decoration is in iron-red, copper-green, violet, and yellow and appears on the belly and on the neck. Vertical green lines divide the belly into four compartments, each of which contains a reserve with a quatrefoil green surround against a ground made up of a regular pattern in iron-red. In the reserves are traditional Chinese decorative motifs representing flowers associated with the four seasons: the peony (emblem of the spring and symbol of wealth and high rank), the lotus (emblem of the summer and symbol of constant harmony), the chrysanthemum (emblem of autumn and symbol of long life and of continuity), and prunus (emblem of winter and symbol of long life, perseverance, and hope).
The decoration on the belly is marked off at the top and bottom with borders of lotus leaves in iron-red, followed down below by a copper-green ornament on the foot ring and up above by a ring of leaves. The neck bears six fields decorated with flowering lotus. The iron-red pattern of the ground on the belly is made up of single circular elements assembled so as to enclose a quatrefoil; the form corresponds to ancient Chinese coins of the kind used in the Middle Kingdom from the seventh century onwards and reflects the contemporary world view that the earth was square in shape and surrounded by the heavens in the form of a circle. The motif was regarded as a symbol of wealth and well-being.