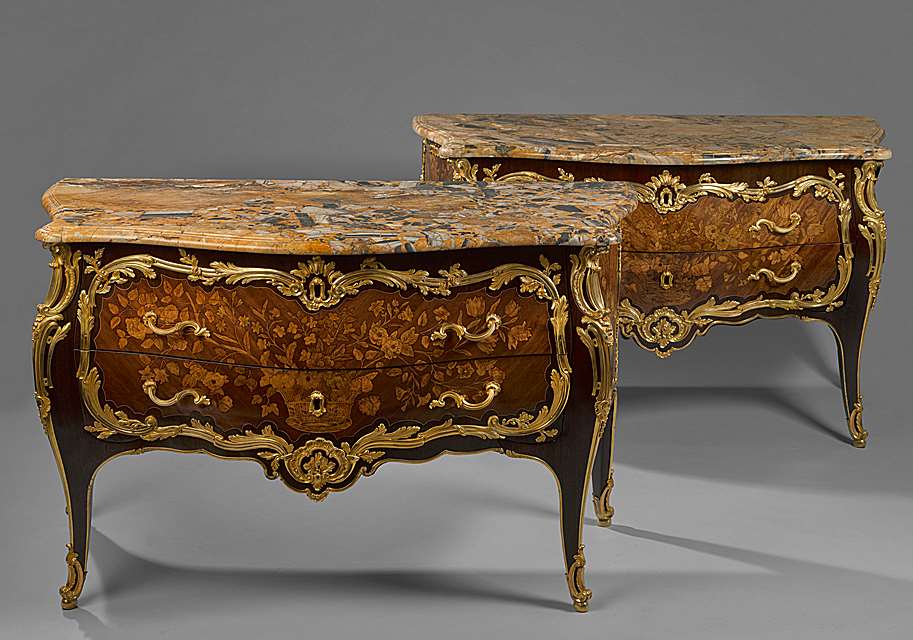 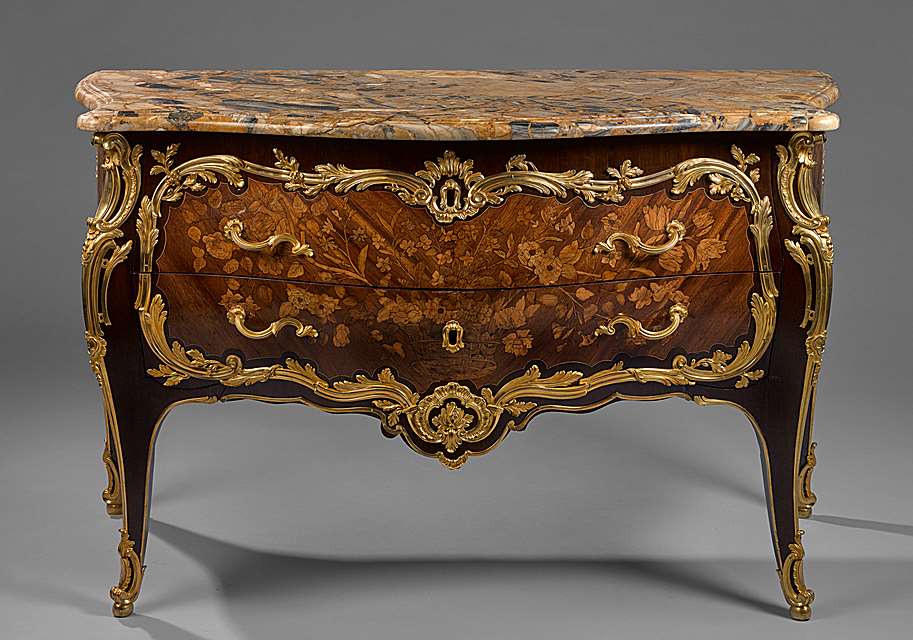 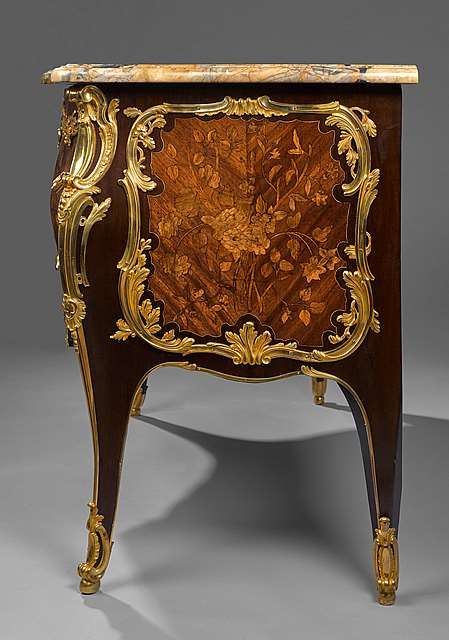 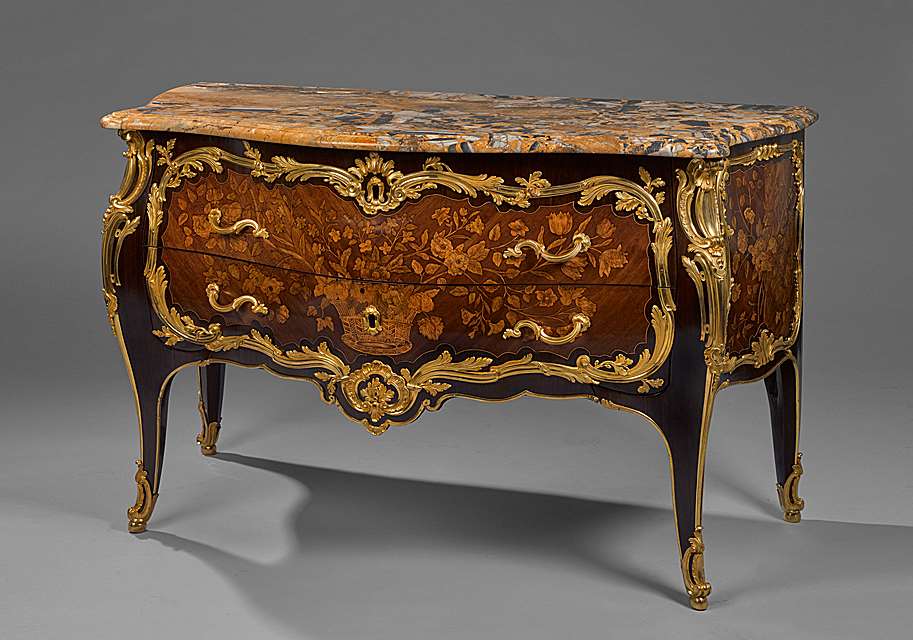 Apart from slight differences in the veneers, these two commodes are identical in terms of construction and external appearance – suggesting that they were conceived as a pair to be placed in the same room. The elongated form of the pieces makes them appear somewhat squat and they are characterised by the emphatic bombé curvature of the front and the sides. The carcass of the piece, which contains two drawers sans traverse, rests on four short, splayed, scrolled legs that curve in an “S” shape directly into the uprights, responding to the bulbous curvature of the main element. The edge of the rail describes a series of flat curves that run down to the apron. On the short sides the rails curve outwards in an arch toward the centre. Both commodes are covered by a heavy top [1] with a scalloped, profiled edge.

The veneer work makes use of strong contrasts between the colour of the borders and of the reserves containing depictions that they outline. A dark amaranth ground is used for a frieze whose outer edge follows the outline of the commode while the inner edge defines a scalloped reserve, differentiated by string inlays, which is inlaid diagonally, opposite to the axis. An artfully depicted wicker basket in the reserve is filled with an arrangement of long-stemmed flowers spilling outward in all directions. The sides are decorated with more relaxed floral arrangements. The effect of alternating light and dark and the lively use of internal lines give the plants a highly naturalistic appearance. This impression is achieved by the interplay between the way in which the wood veneers are cut and the lines of the grain as well as by the engraving, firing, and cauterising. Some of the leaves still show traces of the original green colour, which must have made the plant motifs [2] seem even more natural and colourful.

The areas of the piece backed with amaranth wood have bronze mounts in the form of projecting tendrils of leaves and flowers whose curves directly trace the outlines. They surround the front of the drawers and the side areas; at the centre, the tendrils end at the top and at the level of the apron in rocaille ornaments, the upper part of which surrounds the key plate. The outer edges of the piece are additionally emphasised by a smooth bronze band that follows the serpentine lines of the rail, leading into elongated ornamental corner bronzes with upright oval cartouches surrounded by shell-work and tendrils. These emphasise the pronounced curves of the uprights. The legs are fitted with bronze shoes. They are designed as ball feet mounted with an oval medallion flanked by two “C” curves with shell edging and crowned by an acanthus leaf. Curving, “S”-shaped foliate tendrils form the handles to the four drawers.

The stamp “N·PETIT,” which is to be found in both pieces on the top of the left-hand rear leg upright, refers to Nicolas Petit (Chaource 1732–1791, master 1761), an outstanding [3] Parisian ébéniste from the second half of the eighteenth century. After registering his master craftsmanfs certificate in 1763, Petit opened a workshop in the Rue Faubourg Saint-Antoine under the name gNom de Jésus.h During his early phase, he worked mostly for cabinet-maker colleagues, marchands ébénistes and marchands merciers. The fact that he was able to establish himself as a marchand ébéniste in the early seventeen-seventies gave Petit direct access to the highest circles so that soon personalities such as the Duc dfOrléans or the Duc de Bouillon were among his clients. Following the example of the best craftsmen of his time, Nicolas Petit varied his style, adapting it to suit the current Zeitgeist. Consequently, he produced Louis XV encoignures in the manner of Mathieu Criaerd (1689–1776, maître in 1738) as well as transition commodes in the spirit of Jean-François Oeben or neo-classical furniture that is close to the work of Jacques Dautriche (1725/28–1778, master 1765).
Therefore, while a considerable part of Petit’s oeuvre (including numerous clock cases) was made in the transition style of the seventeen-sixties and seventeen-seventies and in the style of Louis XVI, the impressive commodes described here offer a rare example of his work that embodies the completely developed, picturesque goût rocaille of around the mid-eighteenth century. Alongside the skilful way in which he interpreted this style, attention should also be drawn, above all, to the exquisitely chased bronze mounts that almost equal those by B.V.R.B. As hardly any furniture of comparable quality from the early period of this ébéniste has survived, let alone a pair of pieces [4], these two commodes represent particularly rare examples.


[1] This material is known as brèche de Médous jaune, a yellow marbled breccia with black, white, and grey marble fragments from the region Bagnères-de-Bigorre in the Pyrenees. This stone has a pronounced character and was used far less often in fine eighteenth-century furniture than the much more popular brèche d’Alep.

[2] The fashion for naturalistic floral marquetry in the mid-eighteenth century is reflected in, above all, the works of Jean-François Oeben (Heinsberg 1721–1763; maître in 1761) and Jean-Pierre Latz (near Cologne 1691–1754; maître before 1741), in which the black contour lines are engraved. Bernard II van Risenburgh (called B.V.R.B; Paris c. 1700–c. 1765; maître in 1730) had perfect command of a technique based on the choice of woods that allowed him to dispense with internal lines. Furniture made in a very similar manner is also to be found in the oeuvre of Pierre II Migeon (Paris 1701–1758 Paris).

[3] A number of pieces of his furniture are today in important collections, for example, in the Musée des Arts décoratifs and the Musée Nissim de Camondo in Paris, Musée Lambinet in Versailles, and in the Wallace Collection in London.

[4] The only comparable piece that could be cited is a commode of similar dimensions that was once in the Segoura Collection in Paris (illustrated in: Droguet, Anne. Nicolas Petit 1732-1791. Paris, 2001, p. 51). This piece already shows elements of the style Transition and the central depiction is a trophy composition of music instruments framed by a meander band on a green ground.