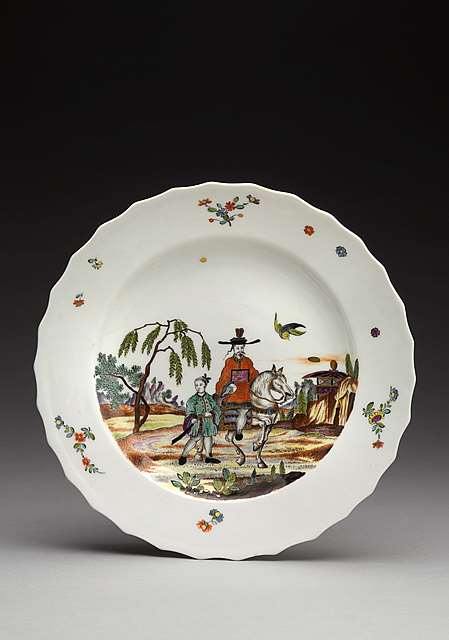 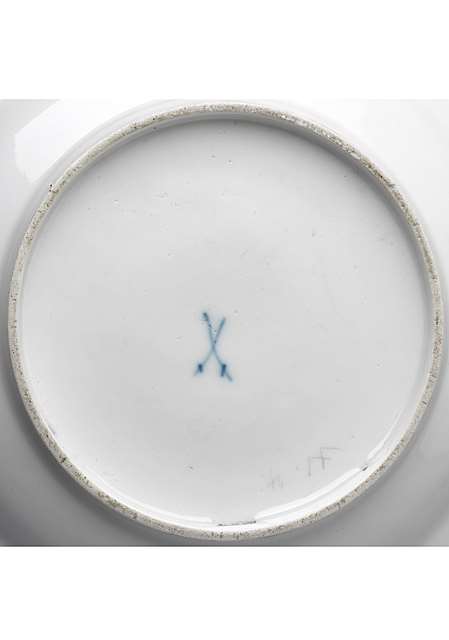 Chinoiserie motifs were used on Meissen porcelain in both painted decoration and figurative sculpture for most of the eighteenth century. The Saxon elector and Polish king Augustus the Strong had a passion for all kinds of exotic art, particularly the grotesque, which led to a virtual mania for all things Chinese and Japanese. The numerous travel reports penned by Jesuit missionaries in Asia, some of which appeared in the 17th century, fired the imagination of the entire European intellectual world and made Asia seem like a dream world with idyllic living conditions. This was the background to the appearance of such images of the Far East on the present Meissen plate dating from 1735/40., The rim alone with its thirty cut‑out convex arcs reveals a striving for an unconventional appearance, and the décor satisfies the desire for an oriental idyll. The ledge is decorated with triangular sprigs of indianische Blumen interspersed with further single flowers, yet enough space is left for the luminous white of the porcelain to make an impact, leaving the observer in no doubt about the quality of the material reinvented by Johann Friedrich Böttger of which the Elector-King was so proud. The deepened well of the plate contains a figural composition in an exotic landscape above which a little golden sun and a swooping bird in the Japanese Kakiemon style are set in the otherwise white sky. A willow tree on the left and a pavilion with an umbrella-like roof above yellow rocks on the right. On the base formed by an area of ground with leafy plants in the darkened foreground, a white horse trots in the centre, a mandarin or shogun seated on a costly saddlecloth on its back. He is wearing white stockings, a red robe and a broad-brimmed black feathered hat. The servant striding along beside him, also in white stockings, is wearing a green frock coat with purple cuffs and is looking to his right. The style and type of painting resemble the approach of Adam Friedrich von Löwenfinck, but the unrealistic folds of the garments and the artistic inconsistencies in the anatomy of the bodies suggest that a painter in his circle is more likely to have executed it. The artist copied the figural group from a copperplate engraving by Petrus Schenk Junior (1698-1775) from the series “Nieuwe geinventeerde Sineesen…”, Amsterdam c. 1720. This series was in the manufactory’s inventory of patterns at a very early stage, as other motifs from it have also been confirmed on various items of porcelain dating from the 1730s. Incidentally, Petrus Schenk was also one of the merchants who had a commercial relationship with the manufactory in 1739, not as a seller of engravings, however, but as a buyer of porcelain (Sächsisches Hauptstaatsarchiv Dresden, Geheimes Kabinett 10026, Locat 1342/05, Vol. 11, fol. 24).