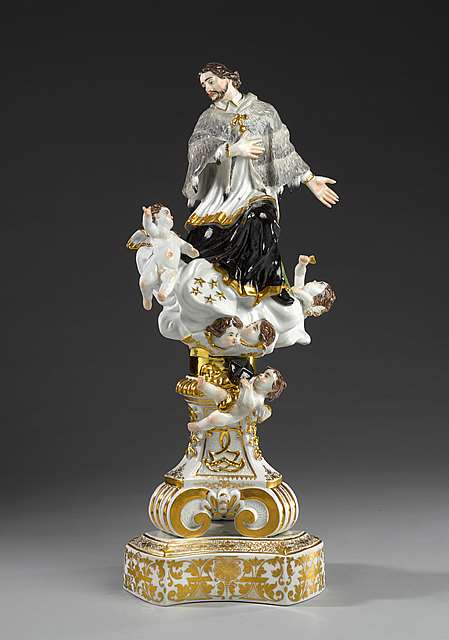 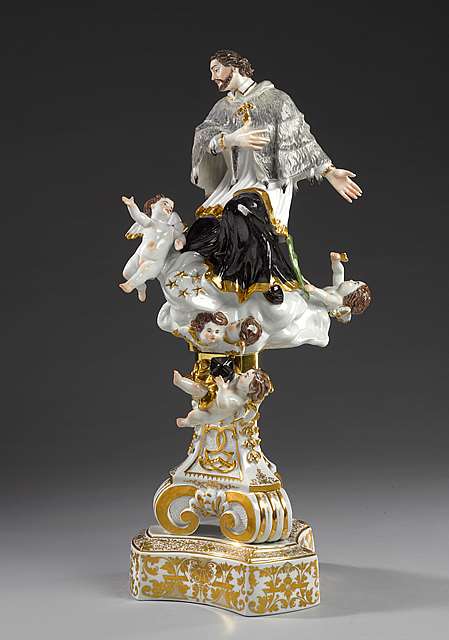 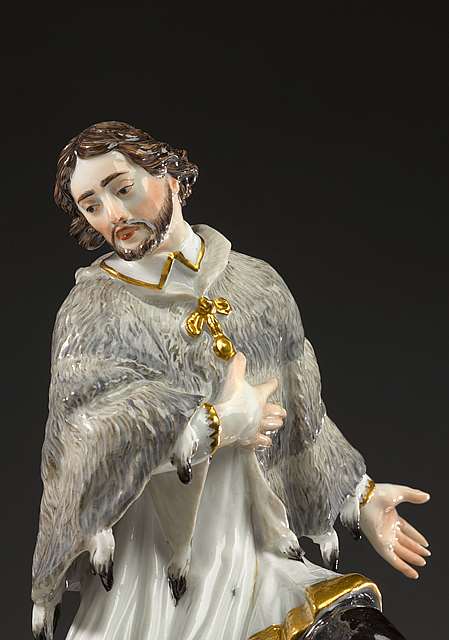 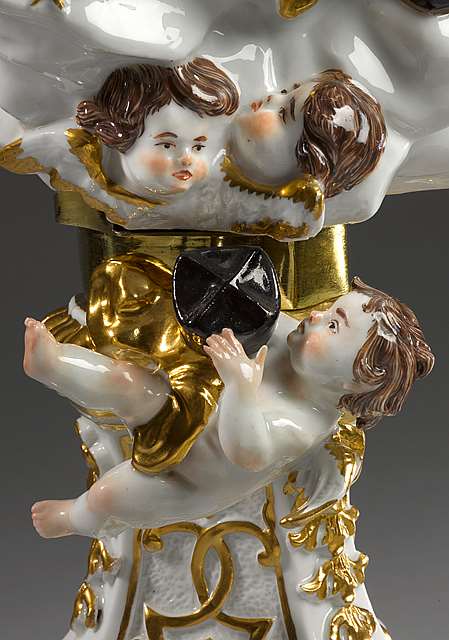 This porcelain statue modelled by Johann Gottlieb Kirchner was most probably based on a sandstone sculpture in a church in Prague. Prague was the city in which this saint was most widely venerated. It was there that John Nepomucene (Pomuk near Pilsen 1345–1393 Prague), who was vicar-general of the Archbishop of Prague, Jan of Jenstejn (Prague 1347/50–1400 Rome) died as a martyr on March 23, 1339. Together with Jenstejn, Jan Nepomuký, as he is known in the Czech Republic, became involved in disputes with Wenceslaus IV (Nuremberg 1361–1419 Wenzelsburg/Prague), King of Bohemia and King of the Romans. Nepomuký and Jenstejn strongly defended the rights and autonomy of the church against the state, and the archbishop, particularly backed by his vicar-general Nepomuký, opposed the king’s plans to use the wealth of the Kladubry (Kladrau) monastery to found a bishopric in West Bohemia. Consequently, the two clerics were arrested. While the archbishop was able to flee the city, his vicar-general was interrogated and tortured. In addition to this dispute the king also suspected that the queen, whose father confessor was Nepomucene, was plotting against him and demanded that he break the seal of the confessional, which he refused to do.

Nepomucene was thereupon burned with torches, dragged through the streets of Prague, and thrown into the River Vltava where he was drowned. The legend is that the Bohemian queen saw five stars that guided her to the place where his corpse lay, which allowed her to have his remains given a proper burial. In 1729, Nepomucene was canonised by Pope Benedict XIII (Gravina/Apulia 1649–1730 Rome).

After his martyr death, St. John Nepomucene was subsequently widely venerated as the “bridge saint” throughout the Habsburg Empire and southern Germany. This naturally led to innumerable depictions of the saint in art, not only in paintings but also in the form of sculptures and porcelain figurines. In Protestant Saxony it was the extremely pious Catholic Princess Maria Josepha of Habsburg (Vienna 1699–1757 Dresden), who had married Prince Frederick Augustus II of Saxony in 1719, that first ordered the production of Meissen porcelain figurines of the saint. It was also her who had the north-eastern chapel of the Hofkirche in Dresden dedicated to him.

In October 1731, a commission from Augustus the Strong (Dresden 1670–1733 Warsaw) was sent to the royal porcelain manufactory in Meissen, in connection with this order drawings of the “altars,” most likely intended to serve as models and inspiration for producing figures of saints, which were also sent.i These were most probably figures of the apostles destined for the chapel in the Japanese Palace, the porcelain palace of Augustus the Strong. These sculptures were made by model master Johann Gottlieb Kirchner and his assistant Johann Joachim Kaendler (Fischbach 1706–1775 Meissen). As a further part of the commission Kirchner also made a Pietà, figures of St. Wenceslaus and St. Anthony of Padua and one of St. John Nepomucene. The model for the latter was made by Kirchner as early as November 1731 “with a base, it is 1 ell long.”ii Despite all the technical difficulties that had to be overcome three casts of St. John Nepomucene were ready for firing in December 1731iii: “. . . which in the raw mass stands shaped and completed, as: 3 pieces of the Saint Nepomucene.”iv One of these three pieces, subsequently fired, was sent shortly after the death of Augustus the Strong on March 7, 1733 from the Dresden warehouse to his son Frederick Augustus II: “For his Highness the Royal Prince of Poland and Lithuania and the Elector of Saxony. . . humbly delivered on 7 March. . . 1. John Nepomucene figure with mounted base 1. crucifix included 80 Thlr.”v It seems most likely that the piece was intended as a private devotional statue for the Elector’s spouse Maria Josepha. In 1734 two further “Nepomucenus figures” were sent to the Japanese Palace. In the delivery slip it states: “In the year 1734 in Dresden for His Royal Highness of Poland [August III] and Elector of Saxony in the month of July somewhat defective porcelain from his porcelain warehouse—2 St. Nepomucenus figures were humbly delivered. . . the porcelain described here was sent by express order of his Royal Highness to the royal Japanese Palace.

This is attested by Martin Teuffert Bett Meister”vi The number used to record these two figures in the inventory of the Japanese Palace must have been “N=224 w,” as this is precisely the number on the example preserved in the Museum of Decorative Arts in Berlin. No entry exists, however, in the palace inventories.
Two further unpainted casts of Nepomucene figures are recorded in the list of pieces in the Japanese Palace under the inventory numbers N=415w and N=416w: “Two different white [Nepomocene] figures, defective, the larger one 17 inches, the other, with two children at the sides , 12½ inches high, nos. 415 et. 416.”vii These, however, cannot be the pieces made by model master Kirchner but must rather be the two versions by Johann Joachim Kaendler from 1739, as neither of their respective heights of 17 and 12½ inches [1 Saxon inch = 2.36 cm] matches the height of Kirchner’s piece, which was 1 ell high (1 Saxon ell = 56.64 cm). But they are precisely the height of the two sculptures by Kaendler. One shows the saint standing and contemplating a crucifix he holds in his right hand, the other depicts him kneeling on the Charles Bridge with two small figures of angels beside him.

Kirchner’s version, however, is a far more rare depiction of the saint. It shows him being assumed into heaven. A three-sided obelisk with outlined pilaster strips at the corners, standing on powerful volutes, and cut off at the top, rises from a triangular, concave curving pedestal, which is decorated with fine gold foliate work, with rounded corners and a profiled upper edge. Overlapping, gilded campanulas, also known in Meissen as “Franzblümlein” are applied to the corner pilaster strips of the obelisk, while below there is a painted gilt foliate ornament. The recessed areas at the sides of the obelisk are decorated with sculptural, gilded strap-work motifs while at the top, a winged putto that presses up against the gadrooned, gilded edge holds the saint’s black biretta in its hands. This is followed by a gilt bronze mount that carries a cloud which stretches to the left and right, at the lower end of which we see the heads of two winged cherubim who face toward each other. A further putto seated to the left on the cloud looks directly at the saint. The saint is shown bending slightly forward, in a pose that suggests humility. As if taking an oath his right hand is placed across the left hand side of his chest, while his extended left hand points downwards to a third putto emerging from the cloud and holding a golden heart in one hand and a green palm frond in the other. The front of the saint’s halo, consisting of five stars, rests on the cloud. On the one hand, this refers to the signs that led to the discovery of his corpse and on the other, it recalls the five letters of the Latin word tacui (I remained silent). While the putti are depicted naked, St. John Nepomucene wears a black talar hemmed in gold, a white rochet, also with a gold hem, and over this an almuce trimmed with ermine tails. The triangular composition of the entire figural group, with the saint placed at the middle, is impressively harmonious and complete and offers a convincing portrayal of his apotheosis. There can be little doubt that the artist used a graphical depiction of this subject as his inspiration, but as an original has yet to be identified. We cannot say whether Kirchner produced this design himself or if the modeller based his composition mostly on an existing model. Whatever the case, the figure of St. John Nepomucene is one of the loveliest and most outstanding sculptures artistically that the Meissen manufactory produced in the eighteenth century.