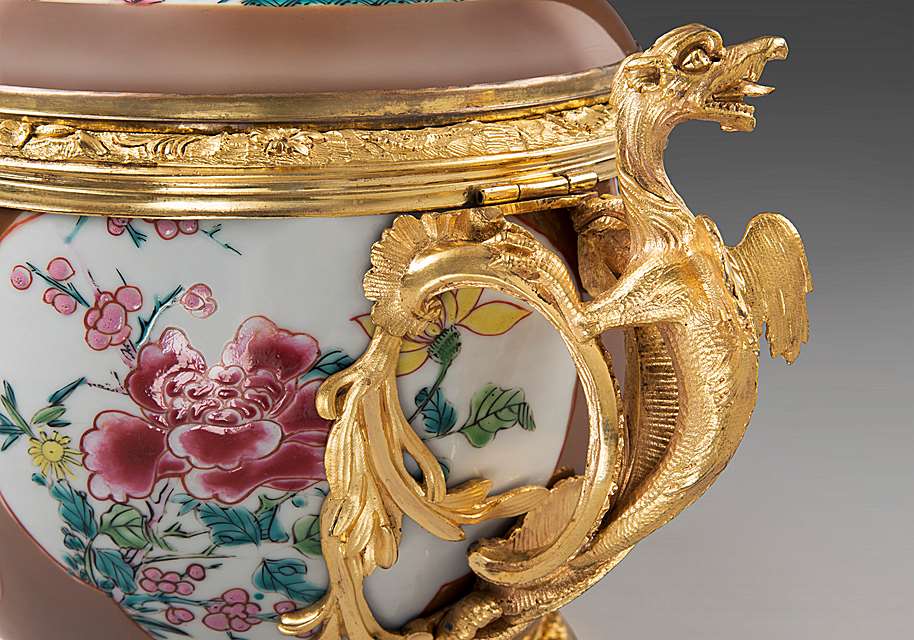 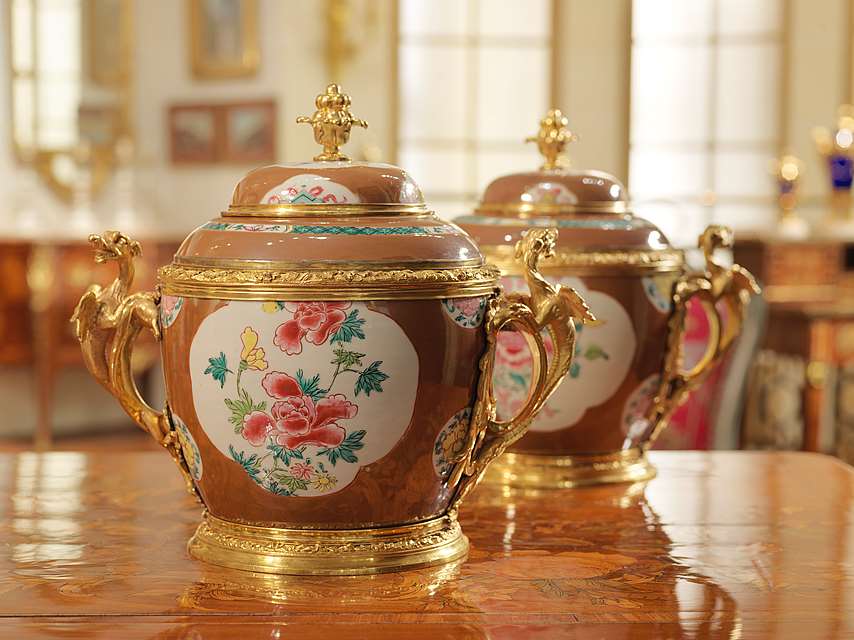 A pair of ormolu mounted lidded vases with capuchin-brown ground

This pair of lidded vases made of Chinese porcelain with fire-gilded Parisian bronze mounts offers an excellent example of the French taste for East Asian vases in metal mounts with a golden gleam. These are exclusive creations of French decorative art from the epoch of the early Louis XV style (c. 1730–1760).

The Chinese porcelain with the Capuchin-brown ground to which the mounts were added in Paris has large quatrefoil reserves and smaller round, white reserves that contain a décor of delicate blossoms, branches and leaves in pink, blue, green and yellow. The colours, which are applied overglaze, belong to the Famille Rose palette of colours from the Qianlong Era (1736–1795). The porcelain of both lidded vases with the delightful floral painting was produced around 1730–40. In stylistic terms the painting is already close to the Rococo and was intended for export. Using the favourite powdery colours of the Famille Rose, the reserves show blossoms and arrangements of flowers. In China each motif had a symbolic meaning. The outlined pictures in the reserves are dominated by magnificent peonies in full bloom. Porcelain painters particularly liked to use the peony, the Chinese “queen of flowers”. It was regarded as a symbol of wealth, gentility and a young woman’s beauty.1 One of the flowers of the four seasons, it can also be read as a reference to spring. In the pictures it appears together with branches of prunus.

The European mounts completely change the form of the imported lidded vases. The typical Chinese form of vase with a small lid was remodelled to make a European kind of vessel. The body of the vase was cut and a new bronze lid edge was introduced between the body of the vase and what was formerly the shoulder. The neck of the vase was omitted. The original lid was then fitted to the old shoulder of the vase to make the new stepped lid. The porcelain finial was replaced by a bronze flower bud. Two inventive handles in the shape of dragons and a massive base make the vase into a magnificent ornamental piece, which has a pendant. The fire-gilded mounts are made with great elegance. The rhythmical decoration in the manner of rough, unhewn stone on the foot and the edge of the lid belongs to the naturalistic style of early Louis XV (around 1740–45). The design of the handles, consisting of two C-shaped volutes to which dragons cling tightly with their heads turned outwards and their jaws open to reveal gnashing teeth, demonstrates great originality. The bronze is extremely finely chased and most impressively worked. We note here the characteristic signature of extremely gifted French bronzier.

The mounts of both vases are marked at several places with the stamp “C couronné“. The “C couronné” mark consists of a “C” for cuivre = copper, under a closed royal crown. This is the Parisian tax stamp which was applied to all alloys containing copper that were either produced or resold between March 1745 and February 1749. In stylistic terms the early Louis XV forms of the bronzes also indicate the period during which the “C couronné stamp” was in use. The creation of the pair of lidded vases can be dated to around 1745.

French taste under Louis XIV (1638–1715, reg. 1643–1715) and Louis XV (1710–1774, reg. 1715–1774) liked to use mounts in the European style as a way of adapting Far Eastern art to suit the decoration of French interiors. The task of removing the “foreign” aspect of the exotic goods and enhancing them with costly mounts to attract the interest of an extravagant sector of potential purchasers in Paris was undertaken by the marchands merciers. These dealers, who specialized in luxury goods of various kinds, represent a special feature of the art trade in Paris. According to the statutes of their corporation the marchands merciers were not subject to any sales restrictions. They had obtained for themselves the right to sell objects of every kind and were allowed to combine different materials and to perfect these by employing a number of different handcraft techniques. Their artificial and inventive design approach in dealing with exotic wares secured the merciers a large and lucrative market until into the late 18th century.
In the estates and auction catalogues of the 18th century lidded vases with mounts in the shape of dragons are extremely rare. In contrast pieces of porcelain in the shape of a jug or tankard mounted with dragons are more frequently found. There is just one East Asian pair of vases with handles in the shape of dragons which is listed in the inventory of the estate of the Paris Hôtel of the Duke of Brissac, Rue de Grenelle, from 8 Floréal in the second year of the French Revolutionary Calendar (1793–94). On account of the rarity and quality of this pair of vases the French Finance Minister of the time had it reserved for himself (cf. Charles Vatel, Histoire de Madame du Barry, vol. II, 1883, p. 393).

COMPARABLE PIECES:
An almost identical pair of lidded vases in this porcelain with Famille Rose décor and practically identical mounts with handles in the shape of dragons was sold at Sotheby’s New York, 18.10.2010, Lot 202; Auction Marc-Arthur Kohn, Paris, 16 May 2011, Lot 39.
The dimensions of this pair (height 30 cm, width 34.5 cm), along with the mounts (the vegetal bronze decoration on the lower part of the handles is lacking), distinguish it from the pair described here.

COMPARABLE PIECES WITH REGARD TO THE MOUNTS:
A pair of vases made of blue Chinese porcelain with similar handles in the form of a dragon in the auction of the collection of Comte Armaillé, 5 and 6 June1890 in Galerie Sedelmeyer, Paris, described and published under Lot 68.
The handles in this dragon design are extremely rare.
A further known example is of Meissen porcelain in East Asian style (published in: Wannenes, Les Bronzes Ornementaux et Les Objets Montés de Louis XIV à Napoléon III, Milan 2004, p. 92). The foot-ring and lid of this vase have the same bronze with rough stone decoration as the pair of vases described here.

COMPARABLE PIECES WITH REGARD TO THE PORCELAIN:
A very similar pair made of the same kind of porcelain but without the handles in the shape of dragons is in the Riahi Collection (published in: David Langeois, Qulques chefs-d‘oeuvre de la collection Djahangui Riahi, FMR Milan, 1999, pp. 80–81; Christie’s London. Auction of the Djahanguir Riahi Collection, 6 December 2012, Lot 17.