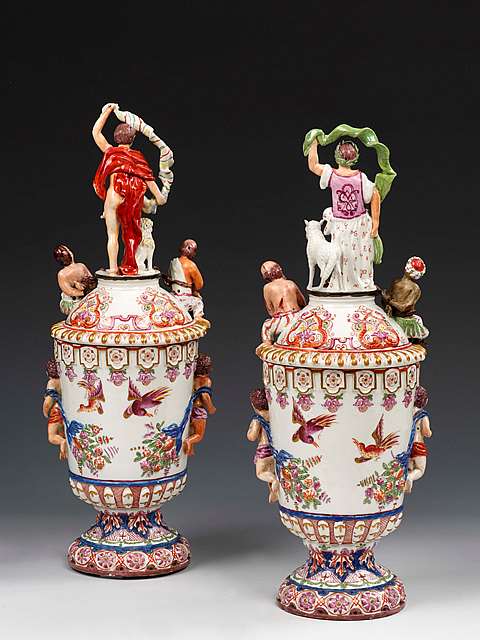 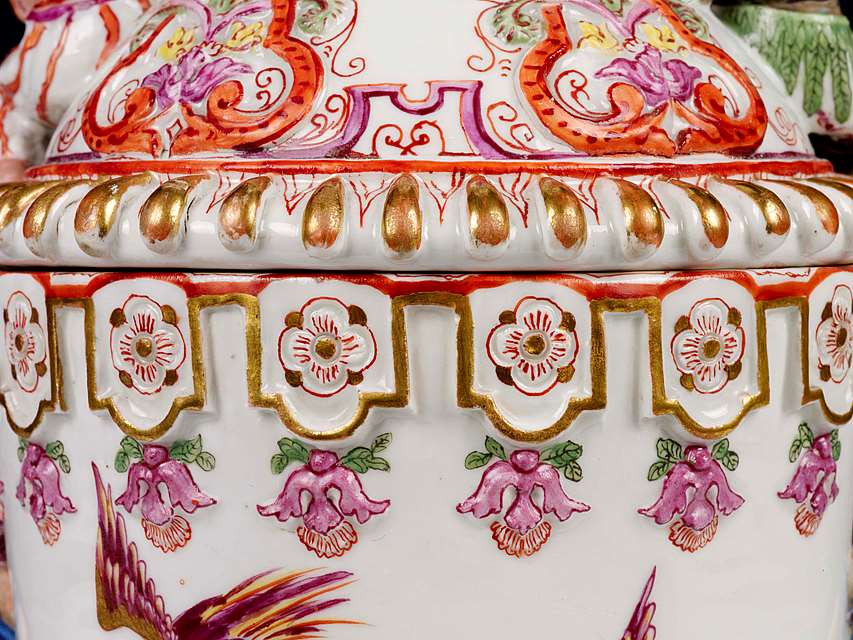 The almost cylindrical bodies of the vases are ornamented on the bowls with gadroons and stand on feet richly decorated with relief rosettes and acanthus leaves. Applied to the sides are fully sculptural figures of boys inside blue cords that open up at either end like cornucopias to spill out abundant flowers likewise rendered in relief. Painted on the surface above the flowers are birds of fantasy in flight of the kind familiar from earlier Du Paquier chinoiserie décors. The lambrequins running around the rim of the vase are also found on contemporary silver, as are the other relief ornaments. Running around the rim of the cover is a border of gilded gadroons topped with relief cartouches. Fully sculpted figures sit in chains on the sides of the covers, with an allegorical female accompanied by an animal enthroned above them. The color scheme corresponds to the Du Paquier palette in the form in which it had been fully developed by around 1725. Particularly eye-catching are the typical radiant cobalt blue and the striking combination of iron-red and light purple. Within the period 1718–1744 when the private entrepreneur Claudius Innocentius du Paquier was operating with an imperial charter in the Vienna suburb of Rossau, there seems to have been a short later phase in which his manufactory produced a number of monumental works with a markedly sculptural character, the present pair of vases being one fine example of this genre. Their aesthetic character is similar to that of a number of extant objects, for example, a bottle with applied relief decoration in the Melinda and Paul Sullivan Collection, Hartford, and another elaborate pair of vases (see Chilton/Lehner-Jobst, eds., 2009, vol. 3, cat. nos. 129 and 497).
The present vases constitute a remarkable achievement on the part of du Paquier and his manufactory, their exceptional size of the present vases being evidence enough that they were produced for a special occasion and commissioned by a patron of high standing.
Closer consideration of the iconography underlying the sculptural figures makes it clear that the two vases have a common subject, reflected in the posture of triumph adopted by the two figures crowning the covers. The figure wearing a laurel wreath is the goddess Victory, accompanied by a lamb symbolizing peace. On the other vase Fortune, the goddess of chance and destiny, stands with her foot placed imperiously upon a globe; significantly, as ruler of the world, she is immediately recognizable as a European, representing a culture superior to that of the “barbarian peoples” beyond its borders. While the animal sitting close to her right leg is a lion and thus a symbol of strength and power, it is also a tame lion and thus an image of power tempered with clemency. That this clemency had been demonstrated in a war is shown with typically Baroque immediacy by the wounded captives sitting in chains at the goddesses’ feet, representing various peoples of the world. Fortune displays a certain similarity with the engraving Le planète – La Vierge by Jérôme Wierix (1553–1619); furthermore, in the engraving the figure personifying the planet is accompanied by a boy who displays a certain similarity to the children bearing festoons on the sides of the vases.
On the vase with Fortune, the boys are not holding tight onto the blue cord like those on the vase with Victory, but have their palms open, in a detail that may possibly reflect the sense of relief once the long struggle for victory and peace had been brought to a successful conclusion.
One particularly important event in the history of the House of Habsburg that took place around the time of the manufacture of this pair of vases was the conclusion on September 18, 1739, of the Peace of Belgrade between Austria, its ally Russia, and the Ottoman Empire. While all the countries involved in the Russo-Austrian Turkish War of 1736–1739 suffered major defeats, Austria suffered the additional humiliation of losing certain territories that it had gained from the Ottomans at the Treaty of Passarowitz in 1718. Given that the Treaty of Belgrade had thus not turned out to Austria’s advantage, the present vases may have been intended to present the situation in the brightest light possible and in any case to glorify what was sincerely considered to be the superiority of civilized western Europe.
On account of the markedly decorative and unacademic character possessed by du Paquier’s figural porcelain, it is generally thought that he must have recruited his modelers from amongst the court confectioners. Even when Du Paquier pieces are concerned with serious themes of world history, the overall impression is one of gaiety and wit. Here, indeed, lies the distinctive strength of Du Paquier porcelain, namely, that it was intended to form an entertaining element in the cultural world of dining and interior decoration, rather than to make any original and independent contribution in the field of sculpture.