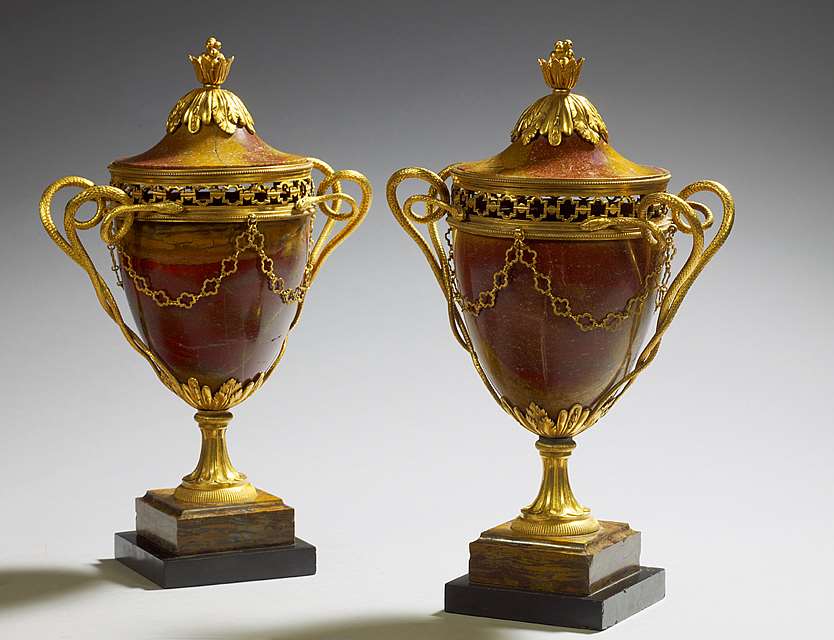 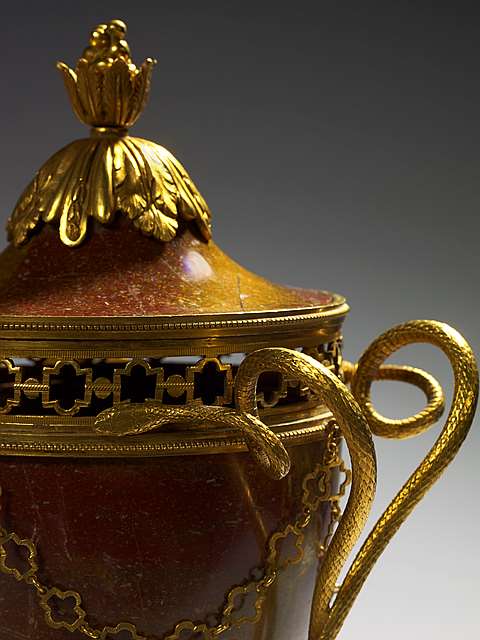 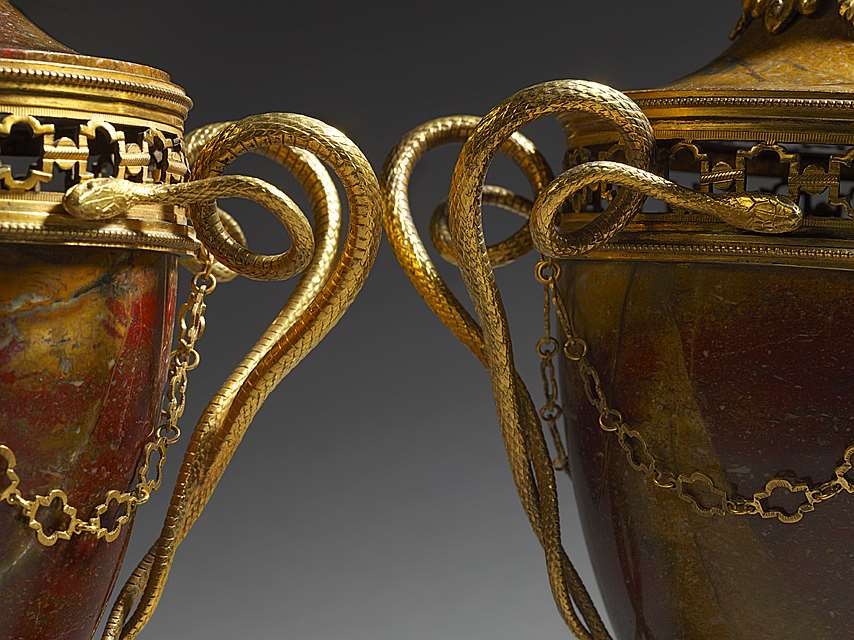 These two rare vases were carved from a single block of jasper, an earthy brown variety of chalcedony with large orange spots, which probably came from quarries in Siberia. The vases are fitted with finely chased ormolu mounts made up of a lower section of stylised foliage, handles modelled as two intertwined serpents, chains, geometrical openwork friezes that enable the vases to be used as potpourris, and, finally, foliate covers topped with a bouquet of seeds. The gadrooned gilt-bronze pedestals stand on quadrangular jasper plinths that in their turn rest on black marble bases. These pieces are typical of the kind of rare marble or semiprecious stone vases that major Parisian collectors imported at vast cost from all over Europe in the last twenty-five years of the eighteenth century.
Along with Egyptian porphyry, agate, and fine marbles such as verde antique, serpentine, and yellow Siena, jasper was one of the stones most highly prized by collectors. In the grand tradition of the marchands merciers, the most beautiful pieces were set in ormolu mounts made by the most highly skilled Parisian bronzeurs of the time. Eighteenth-century auction catalogues classified this stone into different categories, notably spotted or striped jasper. The information provided during these auctions also reveals the richness and preciousness of the Neoclassical settings, often associated with the work of Pierre Gouthière (1732–1813) or Pierre-Philippe Thomire (1751–1843). These sales also provide us with descriptions of objects bearing a close resemblance to the present pair of vases, notably the two sold for 634 livres, an exceptional sum for the time, at the sale of Randon de Boisset’s collection in 1777: “Bloodstone. Two pretty vases in the shape of eggcups; their bases are carved from a solid piece, with very light handles made of two intertwined serpents, small toruses and gilt-bronze plinths in matt gold with a double plinth of the same jasper. Height: 3 inches, 4 lines.” [Jaspe sanguin. Deux jolis vases, forme de coquetier; leurs pieds pris dans la masse, garnis de très légères anses à deux serpents entrelacés, de petits tores et plinthe de bronze doré en or mat avec double plinthe de même jaspe. Hauteur 3 pouces 4 lignes.] Two other vases mentioned in the sale of the famous dealer Lebrun in April of 1791 confirm the use of Siberian jasper in objects of decorative art in Paris at this time: “Siberian jasper, carved by Glachan. Two vases of green and red striped jasper; they have serpents handles carved in the piece; the fractures and distortions in this stone were used beautifully as decoration.” [Jaspe de Sibérie, sculpté par Glachan. Deux vases de jaspe rubané, vert et rouge; ils sont à anses de serpents prises dans la masse: on a tiré le meilleur parti des accidents de cette pierre pour les décorer.]
To decorate these vases, particularly the intertwined serpents, the bronzeur drew freely on projects by Parisian artists of his period, notably on a drawing by the founder Jean-Louis Prieur which displays a similar treatment of the handles; the design was made for the Polish market and is now preserved in Warsaw. Compositions similar to the serpent handles appear on a few other rare pieces made in France or Russia, notably a pair of petrified wood vases now in the Musée Nissim de Camondo, Paris (illus. in Kjellberg 2000, p. 145); on a second pair of Ural jasper vases from the collections of the Russian imperial house and exhibited at the Pavlovsk Palace (illus. in Kuchumov 1975, p. 204); and on a pair of jasper bowls formerly in the collection of Baroness Edouard de Rothschild (Christie’s Paris, 21 June 2006, lot 129).